Showing posts from September, 2011
Show all

September 17, 2011
Every shooting misadventure I hear about involves violation of at least one of the Four Rules of gun safety. In this story from the Chronicle, cops in San Francisco shot at a suspect, missed, and hit two bystanders. This shows us the reason for Rule Four,    Be sure of your target and what is beyond your target. To the obvious question, "What were the officers thinking," the obvious answer is, "They weren't." The suspect was uninjured.
Post a Comment
Read more

September 15, 2011
I do not believe claims that Obama is intentionally working to tank the American economy, by following the radical Cloward-Piven strategy . I am no fan of Obama but this seems to me an unwarranted charge. For it to be true, we would have to prove the same against all the European heads of state. Europe has the same kinds of problems we do: The governments spend too much, borrow too much and lack the political courage to make changes that are big enough to amount to more than halfway efforts at reform. Since Europe has the same problems, we would need a worldwide conspiracy theory to explain why all the governments are headed by Cloward-Piven radicals. It's ridiculous. What Europe and America are finding out is that government programs for social welfare--public solutions to private problems--are double whammy poison. These programs suck money out of the production economy. At the same time they take labor out of the economy, to the extent that people take government money ins
Post a Comment
Read more 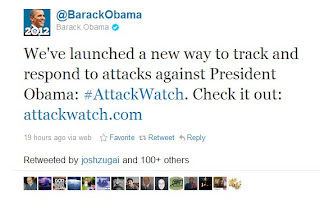 The Obama administration has launched a new web site where right-minded followers can report media, net traffic and rumors unfavorable to the Prez: This begs the question of how you tell an "attack" from the usual, and necessary, debate that happens in elections. Is it an attack to say Obama is massively confused on basic issues to do with the economy? Or is that a legitimate thing to say, if you think it? The attackers featured on the site today include rival candidates Rick Perry and Mitt Romney, and broadcaster Glenn Beck. You can also click a link to get "the facts," such as: By providing assistance to auto companies, President Obama saved more than a million jobs and prevented the American auto industry from collapsing. The Affordable Care Act promotes quality, affordable health coverage for all Americans, regardless of the industry they work in or their union status. I hope this is all transparent to American voters: It is an attempt to put a
Post a Comment
Read more

September 05, 2011
The country's financial course is unsustainable. The way I visualize it is as a train on a track. We need to get off the track we are on, and switch onto another. Yet we continue to rumble past the switches that could head us toward safety, as government shows a lack of political will to do what is necessary to live within its means, which means within our means. Washington continues to spend money nobody has. Representative Maxine Waters, long a proponent of generous government spending, is now calling for a trillion dollar jobs program . She is one of the most vocal proponents of a particular vision of government: To right wrongs and solve problems, the government must spend money. Lots of it. She is not alone; there are many who share this vision, of a world where things are put to rights by the strong hand of government intervention, including the wielding of vast sums of public money. I am not sure what Rep. Waters would say to it, but some of her fellow liberals plainly
Post a Comment
Read more
More posts