Showing posts from February, 2015
Show all

The strange story of the cosmonaut shotgun 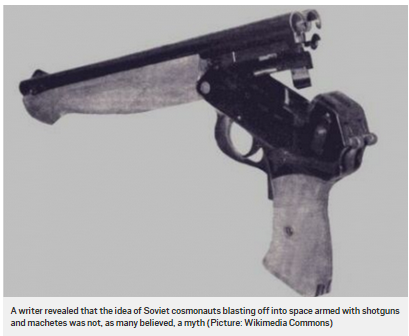 Story here:  http://metro.co.uk/2015/02/11/russian-spacemen-carried-shotguns-and-axes-into-space-5057966/ Up until 2007, Russian spacemen carried short barreled, three-barrel drilling guns in their survival gear. The shotgun barrels were 12.5mm and the rifle barrel underneath was 5.45x39. The gun's removable shoulder stock contained a machete. Remember that the Rooskies use ground landings for their capsules and this gun starts to make sense. Come down in a remote area and you may need some survival gear beyond a scout knife and a fire starter. A suitable firearm is a fine enhancement to your survival gear just about anywhere, providing meat for the pot as well as protection. The Cosmonaut gun also launched signal flares. What the Russians worked out here is really rather clever. Reports  elsewhere say that the gun is no longer in service because the peculiar shotgun ammunition that it uses is no longer readily available. The crew gun is now just an ordinary automatic pistol,
4 comments
Read more

Go here to ask for one:  http://six12.com/#design Manufacturer video via Military.com: The SIX12 is a revolver shotgun system that may be mounted as an under-the-barrel door buster on a rifle, or stocked as a stand-alone shotgun. It has some innovative design features that may lead you to discover further applications for it. I have not shot or even examined one, so I cannot say anything beyond that. I am, though, happy to see development and innovation in shotguns. Lots more about it on the web:  https://www.google.com/?gws_rd=ssl#safe=off&q=crye+six12
3 comments
Read more

For better or worse

photo: Wikipedia It's an odd thing. As soon as you commit to a certain caliber or weapon you become keenly aware of its limitations and the fine characteristics of the other choices. If you choose a riot gun over a modern rifle such as an AR-15, you become keenly conscious of the shotgun's range limitations. If you choose the rifle you become aware of its lesser hit probability, at close range where it counts. So it is with other sorts of guns--carry pistols or you name it. Your choice becomes a fence, on the far side of which the grass is greener. I suppose that is why some shooters have lots of guns. This gun does something or other better than that one, and the other one over here is lighter to carry than either of those, and so on. Still, you have to narrow things down at some point. You cannot carry a whole safe full of guns with you, and it is not practical to stock up on ammo in a dozen calibers. What if there are no wrong choices? In terms of likely threats,
2 comments
Read more
More posts