Showing posts from April, 2016
Show all

Click for article:  American Rifleman | Combat Shotguns of the Vietnam War : The above is a rerun of a 2002 article. It tells you about the guns the military bought and issued during the Vietnam conflict. The commonly used shotguns were pump guns, a mixed bag of Stevens, Winchester, Ithaca, and Remington. The long history of US combat shotguns underscores what I have claimed all along . There is no better personal weapon than a shotgun when the shooting is at short range. Compared to the select-fire rifle its hit probability is twice as good. Compared to the submachine gun, it is very nearly half again better. To me, this means that if my first choice defensive long gun is not a repeating shotgun of some sort, I am making a mistake and selling short my chances to offer the best defense I can. Nearly all justifiable self-defense shootings are at short range or very short range. Right tool for the job, and all that. . . "Winner and still champeen..." (NRA photo)
Post a Comment
Read more

The good shall ever Préval 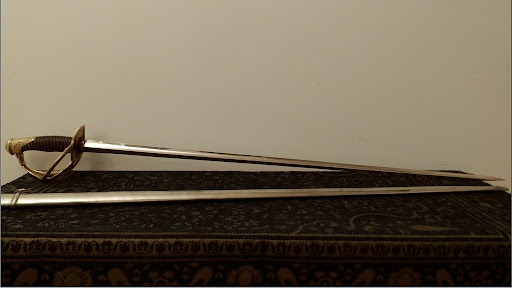 Now and then the sword collector meets up with a curious specimen that has a saber hilt paired with a narrow thrusting blade of hollow-ground triangular cross section. Such a blade, when found in such a mounting, is referred to as a Préval blade. Examples of this sword type are most often French, from the 19th century, and custom made. The examples here are from https://sbg-sword-forum.forums.net/thread/46663/french-m1822-light-cavalry-artillery and depict the French 1822 saber, which was the model for the American 1860 pattern. Préval variation The original model  The name comes from a General Préval, who liked and recommended triangular-bladed thrusting swords. His ideas were liked by some soldiers, who equipped themselves with private purchase swords of the kind. The swords were hilted to match the sabers official to the soldiers' units, thus maintaining the appearance of the official pattern. The scabbards were straight instead of curved but the authorities we
Post a Comment
Read more
More posts