Showing posts from March, 2016
Show all

Hire a Liar: The Most- And Least-Trusted News Outlets In America 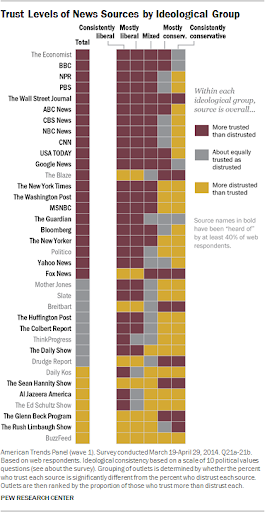 Here Are The Most- And Least-Trusted News Outlets In America - Business Insider Several interesting conclusions can be drawn from the chart included in the above-linked article. One is that liberals are far more trusting of most of the news outlets than are conservatives. Source: Business Insider 'via Blog this'
Post a Comment
Read more

March 25, 2016
From the Baltimore Sun: "Three brothers who live near the police station have been charged in the gunfight. Police have described it as an attempt by the suicidal oldest brother, 22-year-old Michael Ford, to provoke officers into killing him.  Police say Ford was driven to the station by his two younger brothers and began firing at the building and at passing vehicles, causing officers to return fire. Ford fired more than 20 shots, prosecutors said in court Wednesday.  Police said Ford's brothers aided him before and during the shootout and used their cellphones to record video of the gunfight. They also recorded video of Michael Ford offering a "last will and testament," police said." http://www.baltimoresun.com/news/maryland/bs-md-police-shooting-20160316-story.html If the behavior of the Ford brothers is as reported in the story linked above, we have now, as a society, hit rock bottom, with a civilization (so-called) in which the members can no
Post a Comment
Read more

This teaser from The Firearm Blog hints that Aguila is at least making noises about again offering for sale the old 5mm Remington cartridge.  http://www.thefirearmblog.com/blog/2016/03/15/aguila-reintroduces-the-5mm-rrm/ It will be splendid news if Aguila follows through on this. The 5mm RRM is a brilliantly conceived little cartridge. It was ahead of its time and did not catch on in a big way. Only two rifle types were offered to shoot it and eventually the supply of ammo dried up. These days, though, the market is ready and willing to accept rimfire cartridges that are not .22 caliber.This one is a little bigger than a .17 and a little smaller than a .22, and has distinctly zippy velocity numbers. I had a chance to buy a mint condition 5mm rifle, some years back, and passed it up because I had no idea where to find ammunition for the thing. I'm now wondering if I made a mistake.  Of course, a listing in a foreign ammo catalog is not a sure guarantee that you will actually
1 comment
Read more
More posts