Showing posts from July, 2017
Show all

Despite the heartbreak hotel tone and the hokum and hoplophobia, this propaganda film does manage successfully to underline why we have the Four Rules . I contend that if you internalize the Four Rules, make them inflexible and fully habitual, and furthermore take the sensible safety precaution of taking your gun with you rather than leaving it lying around where children might get at it, no scenarios like those following can arise. The tone and tenor of the video, though, are plainly of the 'guns are baaaad, m'kay?' irksome ilk. That it is a gummint production sends an odd message, even granted that this was the eighties and even the military hated the military. It almost says that by training and arming you we have burdened you with a curse. It should be treated as an honor, with heightened responsibilities.
1 comment
Read more 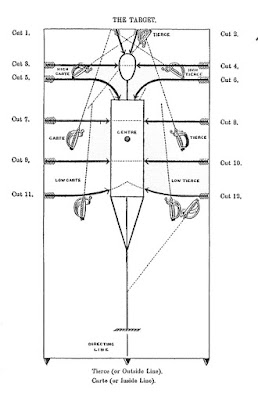 This is the third time I have taken up the matter of Burton's New System of Sword Exercise for Infantry . Here is my first article about it, a book review, not altogether favorable. http://shootery.blogspot.com/2013/07/simplified-swordsmanship-burtons-new.html Second I examined some good aspects of his system and modified them slightly, to better suit my own tastes.   http://shootery.blogspot.com/2013/07/improving-upon-burtons-saber-method.html Now I am going to consider Burton's method of attacking the opponent's sword hand, wrist and forearm. It is the flower of his system. Indeed, the whole system makes little sense without manchette attacks as its focus and best purpose. Continuing what I started in my second article, I am going to propose some changes that I take to be improvements. I think Burton's manchette method as he wrote it down is hampered by certain technical inconsistencies within it and by the terse and in places opaque explanations he gave. But I
1 comment
Read more
More posts