Showing posts from December, 2012
Show all

That was then, this is now

December 27, 2012
Advocates of still more gun laws are now saying "everything should be on the table "  in a great national dialog on guns and violence. I wonder if they really mean that, or simply mean that they want all kinds of new restrictions on gun ownership. Below I talk about the things I would particularly like to see on the table. Safe storage requirements We probably don't need new laws about this; the matter is covered in most states' law codes. We do need a talking-up campaign to emphasize the importance of keeping your guns secured from improper use. Though the laws are on the books they are frequently overlooked or ignored. We see that in stories where a little kid brings mommy's gun to school. That should be impossible.  I have from time to time advised people who have particular challenges storing a gun safely at home--kids from the neighborhood in and out of the house, or a visiting batty relative or whatever--to look into off site storage. A rental sto
Post a Comment
Read more 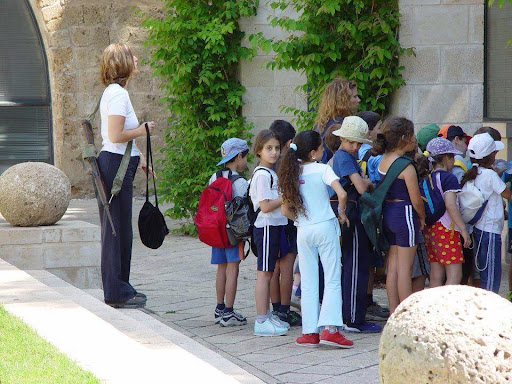 The Israeli way. The problems we create for ourselves by declaring gun free zones would be obvious if we were to examine the matter logically. Saying, as if wishing would make it so, that there will be no weapons in a certain place is a denial of the world we actually live in. Only the law abiding observe the laws.  Side note: That looks like an M1 Carbine. It is nearly an ideal weapon for schoolmarms, for it is handy, light and it earns high marks for being easily controllable in rapid fire.  H/T to AZMulder77 on Twitter for posting a link to the picture.
Post a Comment
Read more

December 14, 2012
Google credits me with the first use, on the Internet, of the term "tactical grimness." That is what I call the overserious attitude and dire words of many people when they talk about guns and shooting. I think it is an emotional response to their inner discomfort with the idea of shooting people or animals. If you are not comfortable shooting living targets, don't do it. Problem solved! The cop who has never fully come to terms with the thought that he might one day need to drop a felon, DRT , should change his line of work. The hunter who has issues over what he did to the animal should probably get his meat from the grocer. On the other hand some of the tactically grim people you meet just talk that way because they think it is expected. Some people behind the counters of some lesser gun shops talk that way, but it is just part of their sales patter. I'm so impressed I shop elsewhere. It's not that shooting is not a serious matter. But it is serious in a
Post a Comment
Read more

I do not want to give the impression that nothing the government does ever suits me. This old video from the Federal Law Enforcement Training Center is excellent. It explains and demonstrates the use of the double action revolver. Thanks to PublicResourceOrg  for making it available on Youtube. My ideas about guns were formed back in an era when it was widely assumed that all of one's sidearm needs were adequately met with a small revolver and a big one. The classic pairing of a pocket snubnose and a full sized belt revolver, of the same brand, made particular sense in that both guns worked the same way, so you did not have to remember to do anything differently when changing from one to the other. I still think a fellow is pretty well armed if he has a couple of good revolvers and knows how to use them.
Post a Comment
Read more

December 11, 2012
A ballistics calculator for round ball shooting is available as a free download via this link:  www.ctmuzzleloaders.com/ctml_experiments/rbballistics/rbballistics.html  . Hats off to the programmer for creating this calculator and making it freely available; it's a very nice tool. I'm not much into muzzle loaders myself, but I do shoot buckshot out of a newfangled breechloader. Because buckshot is just a lot of small round balls, you can use the calculator to take note of the exterior ballistic factors affecting the flight of your pellets. Among the things you can learn is how much buckshot drops at 100 yards if you know where to hold to hit at 30 yards, or at some other distance. I was interested to see that standard velocity 00 lands a little more than a foot low when held for 30. Smaller sizes and lower velocities drop even more. You can also find out how buckshot blows around in the wind and find out how much velocity and energy your pellets have at various distances.
Post a Comment
Read more

It is rather puzzling that some people continue to promote communism, the most thoroughly self-discrediting creed in history. Perhaps this video I found on Youtube will help to explain my puzzlement.  It traces communism's development from its beginning as an altruistic attempt to help the poor through its transformation into totalitarian police states that killed millions. The video includes pictures of some the victims, graphically dead. If you are deeply disturbed by that kind of thing, you should not watch it. The video stops too soon, though, by not proceeding to point out communism's inevitable breakdown and demise. It is not a sustainable plan for it makes no economic sense. Therefore the complete progression is from altruism to murderous brutality and from there to economic failure. It is a pretext, nothing more, when anyone who still wants communism talks about it helping the poor. The poor are not helped by declines in productivity followed by utter
Post a Comment
Read more

December 04, 2012
In a previous post, I mentioned the dual intellectual heritage of the West: moral reasoning from the Bible and logical reasoning from the ancient Greeks. I would like to say more about that. It is now plain that we have squandered two inheritances. Neither kind of reasoning holds sway today. Instead, what people are interested in is affirming the things they want to be true and finding pretexts to do so. The title of this little piece quotes Pontius Pilate, who condemned Jesus to suffering and death. Its modern echo is  "That may be your truth, but it is not my truth." Either saying uses a little philosophical dodge and wriggle to produce a single answer that will work against all challenges. It is intellectual laziness so phrased as to seem clever and wise. Try it: If I tell you that something is surely true, you can simply respond that it is true for me but not for you. At times it is a fair enough thing to say. If I tell you that Mossberg makes a better pump gun than
Post a Comment
Read more
More posts