Showing posts from July, 2014
Show all

July 28, 2014
I earlier reported* on a big lie foisted on the public by Obama et al, that up to 40% of gun sales happen without background checks. Anyone involved in the gun scene knew that could not be true, that the figure was grossly exaggerated. When our reasons were shown, Obama and a Greek chorus of "news" reporters kept on saying it anyway: Forty percent, forty percent, forty percent. Now the lie is exposed for all to see, as Colorado's new and superfluous background check law has roped in all the desperados transferring guns in above-board private sales. The law has now been in place for a little over a year. The actual number of private sales is very small, scarcely justifying the expense of a program to monitor such things. You end up monitoring shooting buddies swapping guns, or country folks adding a gun or two into a complicated horse trade for a truck. Honest people mostly get their guns through the FFL process, the exceptions are generally trivial, and crooks will not
Post a Comment
Read more 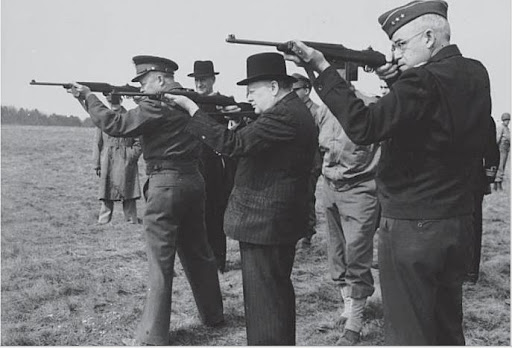 Whatever kind of carbine you select, its absolutely required capability is speed in hitting a close target. The short range snap shot is the life saving shot, the one you must not miss or delay. The carbine is the most versatile of fighting firearms. A well designed example can serve most functions of pistol and rifle. It will serve better for close defense than any pistol and reach out to much longer distances. The M1 carbine, introduced in the WWII era, was a great little carbine in many ways, delightfully handy and light, but it had some problems. Its cartridge was no powerhouse and the long distance accuracy of many GI carbines was hit and miss. (Unless the little gun is set up just right it will throw fliers out of its groups.) The M1 Carbine taught the shooting world some important lessons. Ergonomic form and light weight count for a lot, but so does a cartridge that finishes the fight. ﻿﻿ Left to right, first row: Eisenhower, Churchill, Bradley. M1 Carbines. Th
2 comments
Read more

July 26, 2014
Well. This should be a help in being vewwy vewwy quiet, when hunting wabbits. There is some sharp thinking in the way this can is built. Look at how it puts extra expansion volume underneath the bore line where it is out of the way. Examine the lengthwise guide rods that allow gas to vent freely behind the wad. There is agitation underway to have suppressors taken off the NFA rolls and sold like other accessories. The argument is that these devices prevent hearing loss for shooters and range bystanders and cause less disturbance for people near gun ranges, and quieter guns are less likely to spook game and livestock. There really isn't a good crime fighting argument for keeping them under the NFA. A serviceable silencer is an easy workshop project. Honest citizens only register the things because they are. . .honest citizens. Backgrounder on silencers: http://wcr.sonoma.edu/v08n2/44.clark/clark.pdf
Post a Comment
Read more

How to get a FREE R51 pistol from Remington 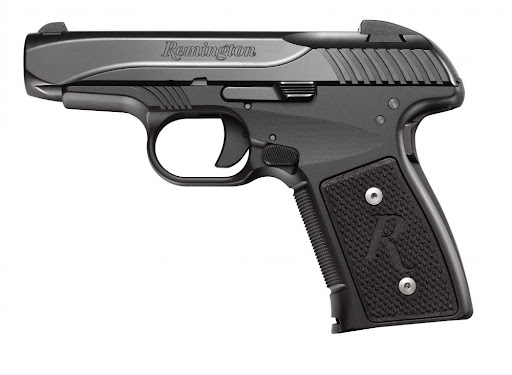 ﻿ ﻿﻿﻿ Remington R51 pistol, via TFB Send them your old one. Yep. Remington Arms says: "Earlier this year, we launched the innovative R51 subcompact pistol to critical acclaim. During testing, numerous experts found the pistol to function flawlessly. In fact, they found it to have lower felt recoil, lower muzzle rise and better accuracy and concealability than other products in its class. However, after initial commercial sales, our loyal customers notified us that some R51 pistols had performance issues. We immediately ceased production to re-test the product.  While we determined the pistols were safe, certain units did not meet Remington’s performance criteria. The performance problems resulted from complications during our transition from prototype to mass production. These problems have been identified and solutions are being implemented, with an expected production restart in October.  Anyone who purchased an R51 may return it and receive a new R51 pistol,
2 comments
Read more

July 25, 2014
Sniping is the use of stealth and marksmanship to achieve surprise. As such it is not limited to any particular weapon, though a scoped rifle is the usual choice. Sly use of concealed cannons, as sometimes occurred in the World Wars, counts as sniping. So does taking out a spy across a street by the use of a sound-suppressed pistol. All the same, the classic use of sniping as a tactic involves crawling around in the weeds with a precision rifle with an optic on it. Let's brainstorm a bit and see if we can come up with more uses for an expert shot who shows up where the enemy does not expect him. His armament may be any aimed weapon if you can get it there unnoticed. Challenge: Think of ways to make use of the basic ideas of sniping, but think in terms of unusual weapons, unusual targets or both.
Post a Comment
Read more

Cloak and dagger -- a note on knife fighting

'Round the cracker barrel t'other day, the talk turned to knife techniques for self defense. Something came up that was interesting enough to share here. One very good way to use a knife is with the knife hand held to the rear. The free hand runs interference for the knife hand and preserves the knife hand's freedom to act. You can use the forward hand to block, grab or hit, but its main job is making sure the knife hand is not pinned or obstructed.  Then, when an opportunity presents, in goes your point. http://seattlecombatives.com/wp-content/uploads/2009/06/applegate.gif Of course this leaves your forward hand vulnerable if the foe has a knife. One old answer is to wrap your cloak around the forward arm to protect it, the origin of the term "cloak and dagger." But have you ever heard of knife and hat? That one's from Spain, the method of using your hat in your off hand to distract and to defend, intercept another's blade or smack him in the f
Post a Comment
Read more

July 21, 2014
Glock-inspired striker fired pistols are popping up all over the defense gun marketplace. They're everywhere you look. In the previous century, something happened to dramatically change the revolver market. Everybody who made revolvers took a careful look at the then-new Smith and Wesson Hand Ejector revolver. The thing just worked. The cylinder swung out the side and the empty cases were pushed out, all of them at the same time, using a rod sticking out of the front of the cylinder. Then you reloaded the cylinder and swung it back into place in the frame, and were ready to fire again. Before long, nearly everyone who made double action revolvers made them that way. Break top actions, side gate loading and the neurotic Merwin Hulbert mechanism went away in favor of the Smith system, which allowed revolvers to be quick to reload and also strongly built, with solid one-piece frames. Something like that is now happening with auto pistols. More and more pistol makers offer strike
Post a Comment
Read more

July 08, 2014
I may be going on too much about this. It's the third time I've brought it up. The last two times didn't stir much reader interest. The shooting community in general, even the defensive and practical shooting segment, does not seem to be deeply interested in examining strategy as it applies to personal defense. None the less, I will go on about it a bit more, hoping to generate some interest in the matter. I have identified several force multipliers you can use in personal self defense with a firearm. Take an ensconced defender role. As a defender fighting from chosen cover you have at least a three to one advantage, which ideal circumstances can boost as high as eight or nine to one.   Maximize your hit probability. Do all you can to improve your likelihood of connecting with your target. This involves choosing your weaponry based on efficiency not style and also carefully evaluating how you go about target practice. Most shots fired in anger miss. You want to dr
2 comments
Read more

Bah humbug, not hurrah, for the Fourth of July 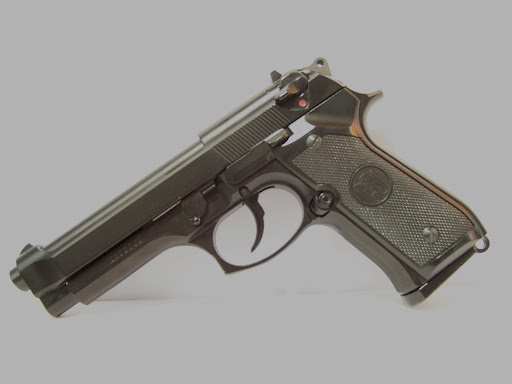 Time to get rid of it? Article here: http://www.military.com/daily-news/2014/07/03/army-wants-a-harder-hitting-pistol.html?ESRC=todayinmil.sm The story is that the Berettas and SIG's are getting old, they fire a round without enough stopping power and so forth. A pistol is of slight importance in the military, unless you happen to be the one armed with it when trouble occurs. It then, doubtless, seems plenty important to you. So I'm all in favor of the military having good pistols. Personally, I see little wrong with either pistol the forces are using. If effectiveness is the big issue here, perhaps putting a flat nose on the 9mm FMJ bullet would be something to explore. Other ammunition innovations that stay within the letter of the law of the Hague convention could be tried out, as well. A spoon nose profile could be tried, or a bullet balanced strongly rearward to encourage early yawing. Abandoning the 9mm NATO cartridge would in one way be a bad idea. It is a c
1 comment
Read more

July 02, 2014
Those who work against your interests are not doing you good, whatever they say they are doing. Any number of things may claimed to be for your own good, or for the public good, that are not good. Such claims are inherently unconvincing. An easy refutation is that I know what my own good is and you are not doing it. Quit doing me such favors. The open carry activists need to stop what they are doing and listen to what everyone else is saying. This is not the right time for this fight, or this is not the right fight for these times. You're scaring the horses, so cut it out. Most recently these self-appointed bubbas of 2nd Amendment righteousness have gotten Target stores to " request " they go away. You know what? I'm requesting it too. Go away. If you think you are making a point by displaying your guns where it is not customary or welcome--even if it is, narrowly, legal--you'd better reconsider what point it is that you are actually making. Apply a test of
Post a Comment
Read more

Where to get the manual for your Browning Double Auto shotgun 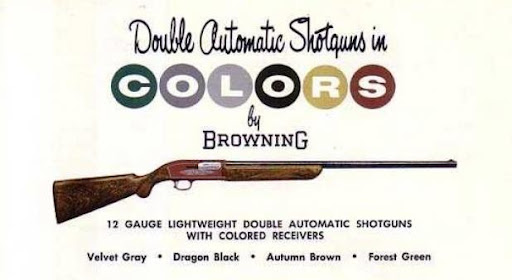 The owner's booklet is online as a PDF file. Randy Wakeman posted it several years ago, but I did not find out about it at the time. I came across it this evening while searching for something else. The factory instructions are exceedingly hard to find in printed form. The PDF of the original manual: http://randywakeman.com/BrowningDoubleAutoManual.pdf Browning's Double Auto shotgun is a great favorite of mine, perhaps because it is a so bizarre: two shots (one plus one capacity), semi-automatic. There is no magazine tube. The second shell is held on the lifter. The gun will serve all the roles of a double barrel gun and is sleeker and handier. It makes sense to me, but it didn't to a lot of people. It was never one of Browning's good sellers and the design was shelved more than 40 years ago. The gun is light, responsive, well balanced, swings easily. It might have been a big success if Sporting Clays had existed back when the gun was being made. It's ju
1 comment
Read more
More posts